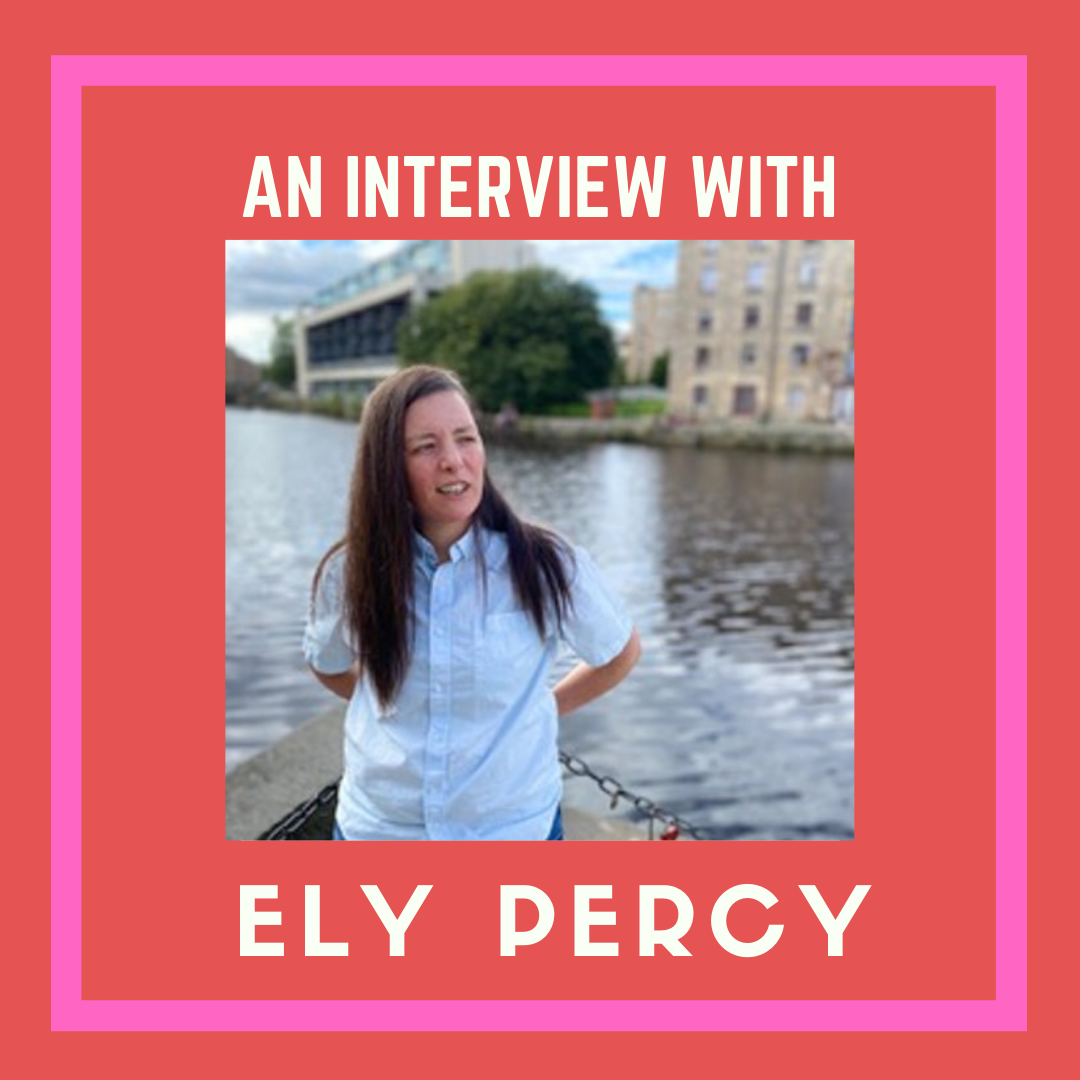 Ely Percy is a Scottish writer who grew up in Renfrew, Glasgow. They have been writing since they were a teenager, turning to pen and paper as an act of catharsis after suffering a brain injury at age 14. Age 43, they have published a memoir and two novels, the second of which has been recently nominated for the Scots Book of the Year award. Duck Feet was published by Monstrous Regiment in March 2021 and has been widely praised for its original, intense, and undeniably Scottish take on the coming-of-age tale. Duck Feet follows working-class heroine Kirsty Campbell as she navigates ‘big school’ (secondary school) in Paisley in the mid-noughties, taking readers on her journey from first to sixth year and into the great beyond. Read my interview with Ely below where we discuss eavesdropping in the name of inspiration, fictional boybands, and finding a reason to write.

What was the first thing you did after you found out Duck Feet was going to be published?

Oh god. I can’t remember! It was in January 2020, and I’d taken a month off social media, and I’d asked Monstrous Regiment if we could pause breaking the news till I was back online, which they very kindly did. To be honest, I’m terrible at celebrating milestone events. I probably went straight to editing knowing me – not that I recommend doing that as I think it’s so important to take time to reflect on your achievements.

As I’m sure you’re aware (and probably sick of being asked about) your use of dialogue and language in Duck Feet is one of the many things that has drawn people to it since its publication. Something I find hard as writer myself is finding the right balance between Scots and English to use in my work. When used too little, I feel that my use of Scots can feel tokenistic, rather than authentic, and when used too much, I feel that famous inner Celtic Cringe that’s been battered into us by years of “Don’t say that’s” and “Sorry, what did you say?”. What are your tips for getting comfortable writing in your own voice?

I don’t think I was ever uncomfortable writing in my own voice. I just didn’t know you were allowed to. It never occurred to me to try until I read James Kelman’s How Late It Was How Late. After that I read Des Dillon’s Me & Ma Gal – I loved that book. Probably my favourite of Des’ works is the play Singin I’m No A Billy He’s A Tim. Allan Bissett is another brilliant Scots novelist who also writes plays. But as well as reading stuff that’s written in your own vernacular, I highly recommend just sitting back and listening to the way people around you talk. One of the things I’ve really missed during the pandemic is the conversations you overhear on public transport.

What was revisiting your teenage years in writing like? Did you find that you still had strong, visceral memories to connect with and write from, or did you have to do some revisiting of old places and friends to inspire you? What emotions did this process bring with it?

I was in my twenties when I first started writing the Duck Feet stories back in 2004, and I still lived in Renfrew and was in regular contact with several of my old high school pals, so it didn’t feel like a particularly big jump to write about being a teenager. That said, I’ve forgotten a lot of things in the intervening years so, Duck Feet acted as a sort of time capsule for me when I went back to novelise those stories 16 years later.

What one thing do you wish you could go back and tell your teenage self?

I have absolutely no doubt that anything I said to my teenage self would go in one ear and out the other because I was never good at taking direct advice. I suppose if I had to pick something I’d say, ‘don’t try so hard’. This is something I’m still struggling with. The words ‘died trying’ will probably be etched on my gravestone.

If you had to create a 3-song playlist for Duck Feet, which songs would you choose?

I’m going to be contrary and say I wouldn’t pick any existing songs…however, I would love it if my fictional boyband Stramash became a real band! I did write entire lyrics to a couple of their (deliberately terrible) songs.

What is a habit/obsession you’ve retained from your teenage years?

Writing letters. I always had pen pals as a teenager. And the first thing I ever had published was a letter in a teenage magazine.

What are your other favourite coming-of-age novels?

Robin Hobb’s Farseer Trilogy, Alice Walker’s The Color Purple, and The Perks Of Being A Wallflower by Stephen Chbosky.

Who are your favourite Scottish writers?

Hmm. Probably Anne Donovan and Jackie Kay. It’s difficult to decide. If you asked me this on another day, I might give a totally different answer.

Name a book you will always return to when you feel sad?

Robin Hobb’s The Assassin’s Apprentice. But then I wouldn’t be able to stop at one book because Fitzchivalry Farseer, is possibly my all-time favourite narrator out of everything I’ve ever read.

Why do you write?

There have been so many different reasons over the last 28 years. When I was 15, I wrote for catharsis. At 19, because someone told me I was allowed to and that I had talent. At 21, I was offered the opportunity to tour with a theatre company and get my equity card, but I turned it down in favour of a place on a pilot course for Professional Writing Skills because I wanted to be the person behind the scenes writing the dialogue not the one delivering someone else’s lines. At 24, I hoped to make a difference in some young queer person’s life by writing a rom-com novel about Scottish lesbians where none of the heroines died. At 29, I thought about quitting because I thought I was too old (because I hadn’t published that novel yet) but I gave up giving up within 24 hours. At 40, the lesbian novel was finally published after many, many rejections, and I realised it was totally worth the wait when pretty much every queer person I’d ever known from Glasgow turned up to celebrate with me. It was the same with Duck Feet, only better because I was writing about my hometown, and I was terrified people would say I got it wrong – they didn’t. Why do I write? Honestly, I don’t know. But I hope I never stop.

You can read my review of Duck Feet here.

‘a twist so good I gasped out loud…’ – Writer’s Bloc’s Rhiannon A. Grist

‘Percy has given us a Scottish Derry Girls. It perfectly captures the highs, lows, and shifting loyalties of adolescence with warmth and humour.’ – Ever Dundas, author of Goblin

‘…these stories celebrate nuances of dialect, anger, division, humour, growing up and getting lost.’

– Jenni Fagan, author of The Panopticon

You can buy Duck Feet here.