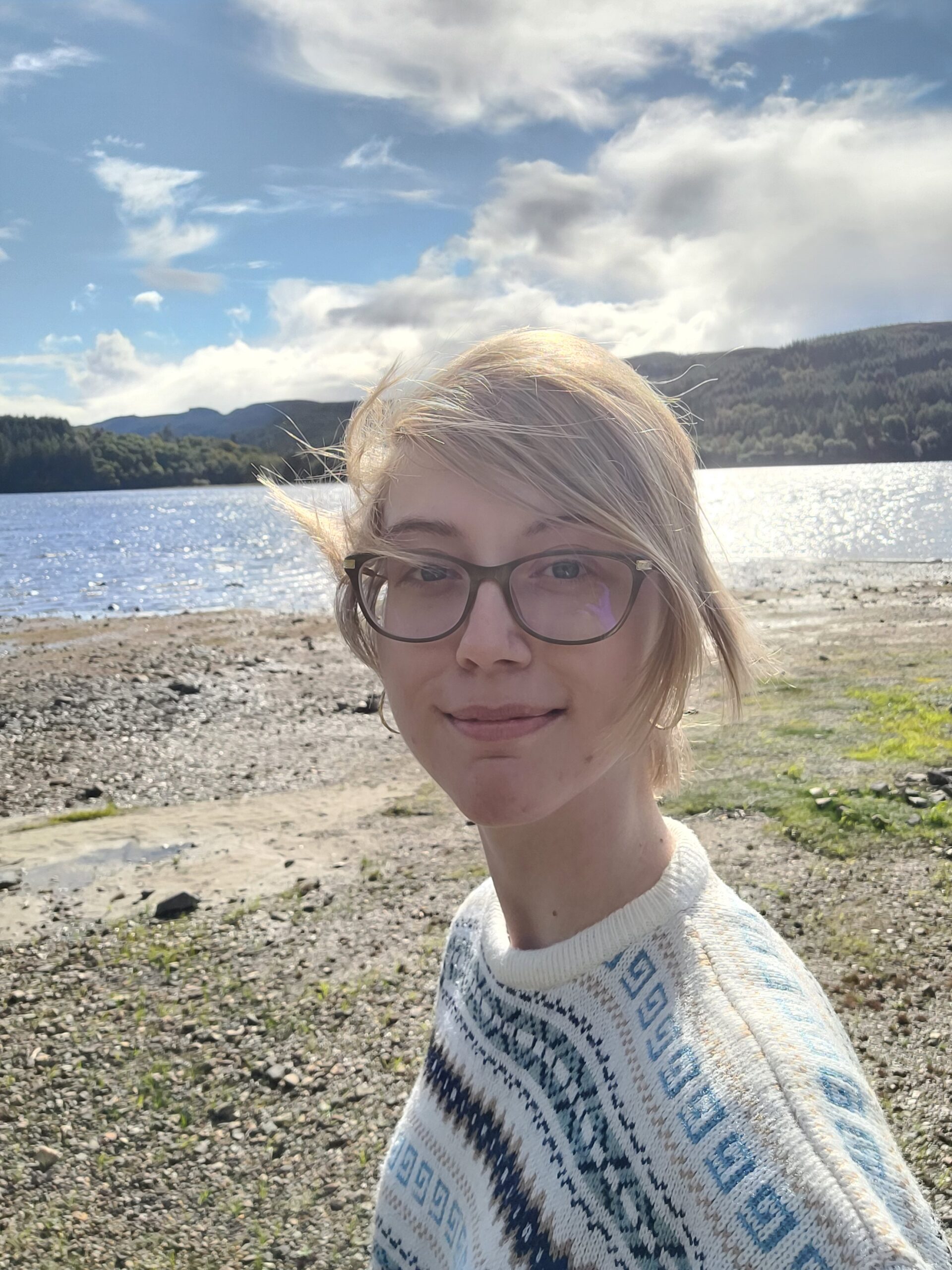 ‘A Study of Perambulation’ by Emily Miller, the winning entry of the 2021 Ringwood Short Story Competition, is a clever character-driven story that draws parallels between love, family, mythology, and surprising truths about the human condition, with the gut-wrenching reality of being alive.

Emily is a Master’s Degree Creative Writing student at the University of Edinburgh. Her undergraduate degree, also in Creative Writing, was earned at Murray State University. She currently resides in Scotland, but her permanent residence is in a log cabin in Kentucky, where she is permitted much free time and no Internet.

I had the pleasure of asking Emily some questions about her process as a writer, her experience living between Kentucky and in Edinburgh, and her fascination with the walks of friends and strangers alike.

What is your writing background?

“My background is creative writing in Kentucky: as a writer, people tell you, ‘There are other paths than just becoming an author, you should explore those’. For a long time I did and none of those clicked as much as writing.

Before I was a writer, I was a reader. I was English Lit before then, my mother taught me to read when I was aged four. I have been a reader my whole life so it was a natural transition into writing. There was never a time that I thought I wasn’t going to be around books… I’ve been doing it since I could read sentences.”

What do you think connects your stories?

“I’m mostly interested in writing about people than I am anything else so most of my stories tend to be character-driven, and I tend to focus on relationship dynamics and how people interact more than anything else.”

How did you start out in writing?

“I live in the middle of nowhere. Kentucky is wonderful, but… people say ‘I live in the sticks’ – well, I live in the twigs on the ends of those sticks. There was no internet, there were no other kids my age, and my two brothers were usually hogging the television so there was nothing else to do but read. If you don’t create your own entertainment, you’re not going to have it out there. My mother gave me an early education, my father is a very oral storyteller – he does all the hand movements – so I grew up knowing what a good story sounded like. You add those things onto the fact that I have nothing else to do: ta-da!”

What are your thoughts on Scotland having grown up in Kentucky?

“Scotland and Kentucky are almost the same place. You have rolling green hills, large mountains, everyone speaks with an accent that I can understand but no one else seems to, and everyone gets really up in arms about one particular kind of whisky.

Before I came here, I had never ridden a taxi by myself… I had never been on a public bus. I had never lived in a city for more than 6 months. So all the people everywhere and trying to find everything and having food delivered to your door was revolutionary.

People complain about the hills here, but that’s probably my favourite part. I’ve been in other cities – New York, London – but I like Edinburgh a lot more. The sidewalks are so much nicer, the people are so much nicer, there are more green areas. The layout of the city is more organic and therefore intuitive… things are related to the things around them. If you get lost, fine, you’ve just found a way to find something else.”

Do you think moving from Kentucky to Edinburgh inspired your writing?

“I would say that the people here are different from Kentucky. Two of the walks from the short story I wrote I literally stole from two people I know. One of the girls upstairs in the building I live in has one of the smoothest walks in the world. When she walks, her head doesn’t move, her legs move perfectly like safety scissors… it’s fascinating! I told the other person’s walk I wrote about, ‘I pretty much ripped off your walk and gave it to someone else’. His only question was, ‘Did you use the word swagger?’, and I said yes, so he was fine about it.

I took a leaf out of writing advice from my undergrad… I have this beat up, tiny notebook and I will tend to take it with me places. If I see an interesting detail or a simile pops in my head I will write it down. So because the people here are different – for example, different sidewalks so people go slow – a lot of the story was based on things I had seen in Edinburgh. I gave these experiences to someone with a more interesting perspective than mine.”

Do you have any advice for young writers?

“As a young writer I feel like I’m not qualified to give advice to anyone undergrad or lower. I know enough to know that I don’t know enough on that account. If I could give advice to undergraduate writers, I would say the roughest thing in undergrad was that my professor would not let us to write anything fantasy or anything magical or any kind of genre writing. We had to read realism or nothing. While that was infuriating for most of our class, it was kind of like that part in art where they start you out with a series of pencils and plain white object and a white background. And you’re just learning how to use lines to make the paper look like that. It is the most basic thing to strip everything else away – world building, setting – to what your story is about, which is characters doing something and there’s an effect.

While I wouldn’t say you shouldn’t write anything genre ever, the most useful thing for me has been the part that I didn’t like which was how to write the most important part of a story, the people and the things that happen in it. Try your hand at realism. It is a lot easier to take a good story and add in lasers and spaceships than it is to take a really well-built science fiction world and somehow mash excellent people into the spaces you’ve left. Basics are frustrating but they’re also essential and that’s why they’re basics.”

Ringwood would like to say a huge congratulations to Emily for this well-deserved award, and we eagerly await reading her future work.