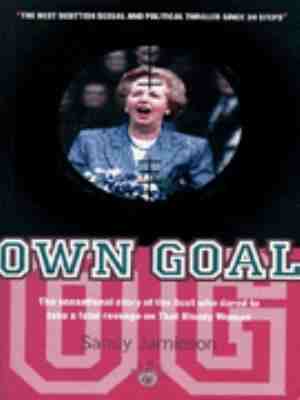 Own Goal is set in Glasgow in 1990 and tells of one’s Glaswegian’s dramatic contribution to Glasgow’s Year as European City of Culture.

The first part, Game One, tells the story of Frank Hunter’s attempt to gain a fitting revenge on the Tory Headmaster who had scuppered Frank’s most precious dream many years previously. His plan, involving an English prostitute and a Lochgelly belt called “Old Faithful” works out perfectly, except for one fatal little hitch.

Game Two tells how the consequences of this miscalculation drive him to seize the political destiny that will make him immortal, as the lucky Scot who implements the secret fantasy of most of his country folk and gets That Bloody Woman in the sights of a high powered rifle.

His chosen location, Hampden Park on Cup Final day, ensures his defining act will combine the two main strands of his life, football and politics,  a fitting culmination. A Celtic supporter all his life, he briefly worries that his act might spoil the game for the tens of thousands of Celtic supporters present, but concludes it will not.

Praise for OWN GOAL

Own Goal was described in the ‘Herald’ Review as “The best Scottish sexual and political thriller since 39 Steps” and the Herald also referred to it as “A peculiarly Scottish cocktail of the passions of politics, football, sex, religion, love and friendship”.

The  review in “The List” gave the book 4 stars and stated: “For a detailed and entertaining look at the ironies and inconsistencies in Scottish football and politics, there is no need to look any further then Jamieson’s latest novel OWN GOAL. Simply riveting”.

Other reviews stated “this intoxicating book adds an important new voice to the national debate about destiny and identity” and “A major addition to the list of books which help explain Scotland”.

Own Goal was selected as one of the Books of the Year by Waterstone’s Glasgow Sauchiehall Street branch. Own Goal was also selected as Book of the Year in the ‘Sunday Herald’ by Scotland’s Education Minister who wrote “Own Goal mixes politics, football, questions of Scottish identity and Glasgow humour in an inimitable style. Essential reading for anyone who lived through the Thatcher years.”