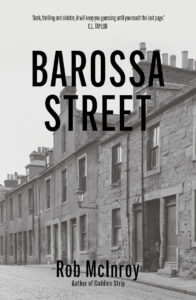 Great news for all Rob McInroy fans out there, and anyone who loves an exciting murder mystery!

After producing the much praised and CWA John Creasey First Dagger longlisted novel Cuddies Strip, McInroy is back with his sequel, Barossa Street, which is available to pre-order now from the link below.

Barossa Street follows the same protagonist Robert Kelty as increasingly disenfranchised with the Police Force after the events within Cuddies Strip he resigns. Feeling high on life with his new-found freedom outside of the Force he runs into an old friend with an urgent request. This is how Bob Kelty winds up at the forefront of another gruesome murder.

This horror turns to nightmare for Bob’s friend as he becomes the centre of the murder investigation with his whole life laid open for all to see. Does he have any skeletons in his closet or are they prosecuting the wrong man? Kelty’s conscience gets the better of him, as well as his desire to do good, so with his girlfriend Annie, they take on the task of tracking down this cruel killer and clearing the name of his old friend.

With twists and turns down every street, follow Bob Kelty in this suspenseful thriller to see whether he can solve the latest who-done-it and find that much needed relief from the trials of life.

Set in Perth, Barossa Street offers, not only a look at the mishandling of justice in the face of 1930’s prejudice, but also serves as a commentary of the British public’s response to the government’s shortcomings. Set on the backdrop of King Edward VIII’s abdication and the threat of war Barossa Street is as much a critique of the times as it is a thrilling murder mystery.

Barossa Street is the second novel by Rob McInroy, who has won multiple prestigious awards for his short stories.  His first novel Cuddies Strip as well as being longleeted for the CWA First Crime Novel Daggers Award also won the  Bradford Literature Festival Northern Noir Crime Novel competition and was chosen by Val McDermid at Bloody Scotland 2021 for her top 3 picks of new fiction, stating ‘I highly recommend it’.

Barossa Street is now available for prepublication order for £9.99 plus P&P. Order Now by pressing the Pay button below and guarantee yourself a signed First Edition copy before the Launch in May 2022.