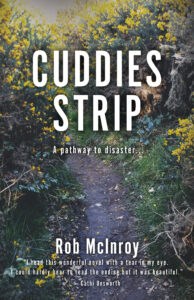 Cuddies Strip is based on a true crime. It faithfully follows the investigation and subsequent trial but it also examines the mores of the times and the insensitive treatment of women in a male-dominated society. It is a novel about love and friendship and the need to break free from the ghosts of the past.

Cuddies Strip is a very visual book , set mainly in the beautiful countryside around Perth, with some scenes in 1935 Perth and the final court denouement set in a grand Edinburgh court.

It starts with two innocent young sweethearts walking home from the Cuddies Strip, a lover’s lane on the outskirts of Perth. Suddenly from nowhere two shots ring out and eighteen year old Danny Kerrigan slumps to the ground fatally wounded. His girl-friend, seventeen year old Marjory Fenwick flees, but is chased caught, attacked and raped, then left injured but alive.

The elderly police doctor who examines her after the attack casts doubt on her claim to have been a virgin, questioning her veracity and her morality, and this is seen by many to damage her credibility as a witness.

The local rural police force, with some ignorant and bigoted old school police officers, treat her with suspicion and make hard work of an investigation with no leads. It takes the combined efforts of the only two policeman to believe and support Marjory, an old Inspector, Victor Conoboy, and a new young Police Constable, Bob Kelty, to conduct a dogged and determined investigation using persistence and modern policing methods to painstakingly pursue the offender and catch him just before he is about to strike again.

Marjory’s ordeal is not over with her rapist’s arrest. She is subjected to another, court-ordered humiliating medical, and the trial itself is a further ordeal with the prominent Judge casting more doubt on her veracity, morality and credibility as a witness, and affecting the verdict of the jury.

While Cuddies Strip is on one level a highly absorbing period piece from 1930s Scotland, this story has strong contemporary resonances: both about the nature and responsiveness of police services; and the ingrained misogyny of the whole criminal justice system.

Cuddies Strip is the first novel by Scot Rob McInroy, who has won several prestigious prizes for his short stories.

Cathi Unsworth, the novelist, has said:

If you would like to save on shipping, the e-book version of this book should be available shortly after it’s release date. Please keep an eye on this page for further details.