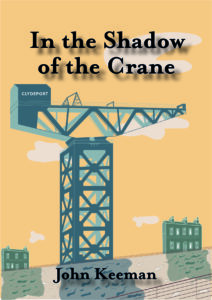 John Keeman was born during the Second World War in Anderston, into a harsh environment of poor housing, ill-health and poverty. He grew up alongside the development of a healthier more cooperative society where slum clearance policies; the creation of the National Health Service; the development of a Social Security safety net; and a strong Trade Union movement   ameliorated the worst  conditions and provided a degree of collective support.

John’s life was a hard struggle to keep steady employment and to provide adequately for his family. He became a doughty fighter for justice, for himself and his family, but also for his fellow men and women, with John always pushing against the system to get justice and fair treatment.

The book takes us through John’s later years as he watches with increasing horror as first Thatcher, then more recently ten years of Conservative government, resolutely decimate public services, emasculate trade unions and dismantle key elements of welfare and public service. The job insecurities of his early life have been replaced with an even more hostile environment for young people, as workers’ rights have been removed and Zero Hours contracts with their insecurities and defects have become the norm for so many. This, along with the traditional defence mechanisms of Tribunal and Appeals being removed or distorted against the interests and needs of the poorest and most vulnerable in society. John tells how he represented many individuals within this group, with a high success rate.

John’s book is a powerful argument in the defence of collective support and strength, and  a railing against the recent dismantling of almost all elements that provided that collective support to the poorest and most vulnerable members of our society.

The life of John Keeman unfolds in the shadow of the Finnieston crane. From growing up in a Glasgow little remembered, through a diverse slew of careers, and into some of his most personal moments – both joyful and painful. With a voice equal parts wry and candid, John tells his anecdotally-rich story; indeed, not everyone, for instance, can say that they’ve literally sent Eartha Kitt flying.

In the Shadow of the Crane is not yet another warm and couthy Glaswegian memoir nostalgically recalling a past that was in reality often bleak, desolate and desperate. Not only is it a multi-faceted literary treat that offers a detailed snapshot of old Glasgow, a grounded memoir, and, owing to John’s legal background, a discerning stance against injustice: it is, in a market saturated with glitz-and-glam autobiographies too often ghost-written, a real and genuine story from a real and genuine Glaswegian. In that regard, John stands in no shadow.

Order your copy below!

If you would like to save on shipping, the e-book version of this book should be available shortly after it’s release date. Please keep an eye on this page for further details.