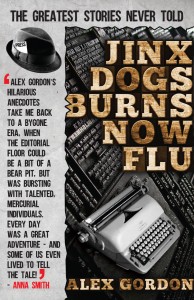 Alex Gordon, after almost half-a-century in the Scottish newspaper industry as a Sports Sub-Editor and Editor, spills the beans in a frank and candid manner. Much is revealed within the pages of this book that was previously kept out of the public domain. And you’ll see why!

Jinx Dogs Burns Now Flu is a rollicking, often hilarious, trip through the crazy world of Scottish newspapers. It’s a journey that takes the reader behind the headlines of the biggest, most sensational stories of our national press. It also introduces the fascinating if madcap characters whose job was to bring you your daily news. Prepare to be bewildered by their antics as they chase front and back page exclusives. You’ll be amazed and amused by the tales that did NOT make it into print. Until now, as Jinx Dogs Burns Now Flu brings many sensational stories into print for the first time!

Other stories here throw an entirely new light on what actually happened around many of Scotland’s most famous sports stars; stories that will cause quite a few reputations to be reassessed.