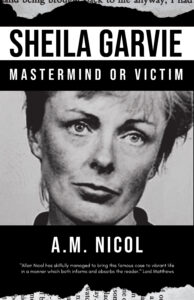 One murder. Three versions of the story.

A gunshot ends the life of Maxwell Robert Garvie on a May night in 1968. Three people are accused of the crime: his wife, his wife’s lover and a young man whom Max had never met. They offer conflicting versions of what happened, practically the only commonality being that Max is dead.

And yet, this story is not about Max. It is about his wife Sheila.

Sheila, more than either of her co-accused, stands as an enigma for the detectives working the case, as a wronged innocent for the lawyers hired to help her. She is branded by the media as a scandalous femme fatale, a murderous mastermind, a Lady Macbeth.

The narrative seeks to uncover, as far as it can, the truth regarding Sheila’s involvement in her husband’s death. Including flashbacks and new theories, the book suggests that appearances can be deceiving and reveals the shortcomings of a system uncaring about abuse victims. Through the point of view of several characters involved in the case, the narrative is made dynamic and gripping, and Sheila is revealed to be deeply flawed, but also deeply human.

Allan MacKenzie Nicol was a Procurator Fiscal Depute for 12 years. He qualified as an Advocate in 1993 and then defended clients charged with more serious offences until 2011, when he re-joined Crown Office and became an Advocate Depute, prosecuting in High Courts throughout Scotland. His book Manuel: Scotland’s First Serial Killer was published by Black & White Publishing; the 2nd edition appearing in 2016 and coinciding with the television series In Plain Sight, for which he was script adviser. The Monster Butler: Inside the Mind of a Serial Killer was similarly published by Black & White in 2011. His novel Liberation, the first to be published by Ringwood Publishing, came out in 2021.

Sheila Garvie Mastermind or Hostage will have an official launch on Wednesday 22nd  June at 7pm in the Victoria and Regent Room in the Grand Central Hotel, Gordon St  Glasgow. Admission is free and all are welcome.

Even if you are unable to attend in person, this Launch will also be simultaneously broadcast live on Ringwood Facebook. So put it in your diary now.

Attendance at the Launch will be enhanced by having the opportunity to look at the book before the event, so order now by clicking the Add to Basket button below to guarantee a signed first edition copy to be delivered before the Launch.