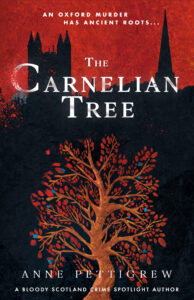 Not The Life Imagined reflected on the experience of Scottish women doctors from the sixties to the eighties, taking on the systemic hostility to full female participation.

Then Not The Deaths Imagined followed the main character from the first book as she  wrestles with the growing realisation that a neighbouring GP appears to going down the same road as Harold Shipman, and finds it difficult to get anyone to take her concerns seriously, with almost fatal consequences.

Ringwood is now about to publish  her third novel, The Carnelian Tree is a multi-layered novel rich in humour and suspense that takes her beyond Tartan Noir to extend the scope of crime fiction as she  interweaves a range of literary and historical references within the plot, with enough  wit and excitement to compete with the very best of Cozy Crime.

A dead body, a disappearance, and an epic lost in time. Unrelated incidents on the surface.  Judith Fraser’s Oxford sabbatical quickly takes a sharp turn when she gets tangled in the mysterious murder of a colleague. With threads leading nowhere, conflicting impressions about people around her, and concern for increasing risk to her loved ones, whom can she trust? Her eccentric housemates? The CIA? Or, herself? Too many questions and insufficient answers.

A uniquely amusing and page-turning mystery novel set in 2003 on the eve of the Iraqi War, The Carnelian Tree follows the journey of Judith Fraser as she unravels mysteries of locked doors, missing computers, cat’s collars, and Reuter’s reports, with the help of DCI Keith Steadman, her potential love interest. Judith probes into people, power, politics, and sex, only to discover that some things remain unchanged. With a shady glimpse of the Oxford underbelly, this cross-genre novel will appeal to the full range of crime and mystery readers including Cosy Crime fans.

The Carnelian Tree is scheduled to be launched in on 20th October at a still to be confirmed venue in Glasgow. Click the Add To Basket button below and guarantee yourself  a signed First Edition copy delivered to your home before the launch.