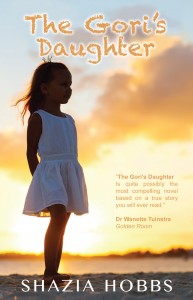 The Gori’s Daughter is the fictional story of Aisha, a young mixed race girl, daughter of a Kashmiri father and a Glaswegian mother moved into the household as mistress alongside the Muslim wife and the children from both relationships.

Her whole life is a constant struggle against the rejection and hostility her background generates in both Glasgow’s white and Asian communities. The book graphically documents her fight to offer her own daughter a culture and traditions she can accept with pride. The book sheds a relentless light on an aspect of Scottish – Asian relationships that is seldom acknowledged.

Its uncompromising exploration of the realities rather that the myths of race relations within modern Scotland is likely to have an explosive impact, challenging as it does cosy assumptions on both sides.

The tale is often harrowing, always exciting and revealing, but is ultimately about triumph; a victory for resilience and decency over bigotry and discrimination.

The Gori’s Daughter can be ordered now using the Paypal facility below.