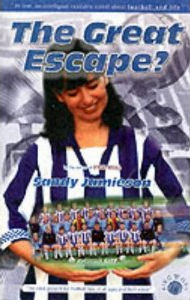 The Great Escape? is that rarity, an intelligent readable novel about football and families. It is the story of Derek Duncan, a Celtic supporter from birth, who became a Scottish international football player, and his attempt to make himself an immortal football manager. He intends to do with a struggling provincial English club Griston City, something similar to what Matt Busby and Bill Shankly his spiritual predecessors, did with Manchester United and Liverpool, and turn a moderate club into a modern giant, able to challenge for top honours not only in England but in Europe.

The book deals with his first season, when he takes over a Griston team rooted to the bottom of the table and determines to save them if humanly possible from the relegation to which they seemed doomed prior to his appointment.

It is about the stresses faced by a manager of a team on the edge and the effect of these pressures in his life and loves. It also explores the impact of these events on the other people involved in the world of football, the players, the Chairman and his daughter, the Board members and most of all, the supporters that hold the club dear.

As well as an examination of the world of professional football, The Great Escape? is also a modern love story about the growing relationship between a lonely manager and  a lovely young woman who understands his situation.

The Great Escape? also demonstrates how an obsession with football can distort father- daughter relationships and it is essential reading for those affected by this phenomenon, directly or indirectly.

Original Response to The Great Escape?