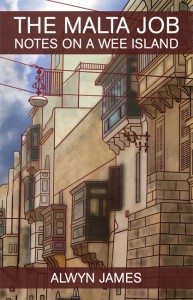 John Smith, a young Scottish journalist with literary aspirations, is sent to Malta to complete a sequel to the very successful MacMurder, a round-up of Scotland’s more infamous homicides. The author had died just before completing the planned sequel MacAbre, a follow-up tale of other gruesome Scottish crimes.

Once on Malta, with the dead author’s notes, he gets involved in a gripping set of circumstances involving high romance, exciting adventure and a bank heist crime worthy of inclusion in either book.

In the words of a prepublication review

“The Malta Job is a highly literate, greatly accomplished fictional debut by an author well known for high quality non-fiction works like Scottish Roots and Other Men’s Heroes. A welcome addition to the ranks of readable, entertaining,  exciting fiction.”

While creating a successful career in Scotland in editing and later in corporate communications, both external and internal, Welshman Alwyn James had several non-fiction works published. Two of these, Scottish Roots, and Other Men’s Heroes, became well-respected leaders in their field

The Malta Job is also available as an e-book from Amazon.co.uk