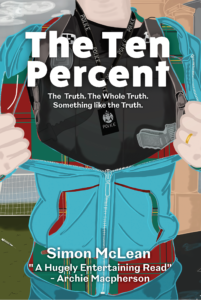 Simon McLean takes the reader on an often hilarious, sometimes scary, always fascinating journey through the ranks of the Scottish police: from his spell as a rookie Constable in the hills and lochs of Argyll; through his career in Rothesay; and to his ultimate goal, The Serious Crime Squad in Glasgow.

Once there, readers are taken into the squad room and ride along as terrorists are pursued, murderers brought to book and armed fugitives confronted; always peeking behind the veil of professionalism and order portrayed to the world. We get a unique glimpse of the turmoil caused when the rules are stretched to the limit, when the gloves come off and fire fights fire and when some of their number decide enough is enough.

This is a very rare insight into the world of our plain clothes officers who infiltrate and suppress the very worst among us. The dealers, the shooters, the gangsters and the paedophiles; they need to fall by any means, and that’s a job best delivered by the few willing to do what’s required. THE TEN PERCENT.

Simon McLean tells ‘the truth, the whole truth and something like the truth’, and the result is a frank and fearless ‘warts and all’ examination of the role of the police in an ever-changing Scotland. It is also by far the most entertaining account you’ll ever read of the varied realities of life as a Scottish policeman.

The Ten Per Cent has been described as “a hugely entertaining read” by Archie Macpherson, the world-renowned commentator.

These high shipping rates mean that for most overseas buyers the ebook, available from Amazon, represents much better value