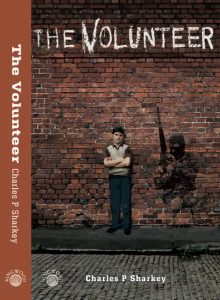 The Volunteer is a powerful and thought-provoking examination of the Troubles that plagued Northern Ireland for almost three decades. It follows the struggles of two Belfast families from opposite sides of the sectarian divide. This revealing novel will lead the reader to a greater understanding of the events that led from the Civil Rights marches in the late Sixties, through the years of unbridled violence that followed, until the Good Friday Agreement of the late Nineties.

Born in the same hospital, within hours of each other, Danny Duffy and William Morrison would never meet again, but their lives, and the lives of their families, would be tragically intertwined by politics, secrets and blood.

While William Morrison shuns the violence that engulfs West Belfast, Danny Duffy finds himself standing in front of a panel of IRA men, ready to take up arms as a Volunteer; but what is he fighting for and how far is he willing to go?

“Reading The Volunteer has deepened and enriched my whole perspective on this crucial period in recent Irish and British history known as The Troubles. Its cast of memorable characters and the varied fates that befall them through the many pages of this enthralling book will linger long in the mind, as will its revelations about the human realities behind the historic events so dramatically covered. This is a book to be cherished, and one to recommend enthusiastically to anyone with an interest in recent social and political history.”

The Volunteer is now available to purchase as an ebook via Glassboxx below: