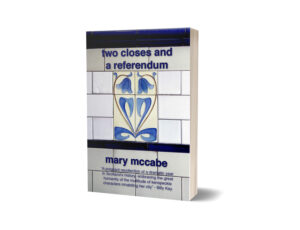 Two Closes and a Referendum is an engaging tale of ordinary people in an extraordinary time. This novel brilliantly captures the growing excitement and fervour of the 2014 Independence Referendum that changed Scotland for ever, as ordinary citizens  explored their identity and wrestled with the  hopes and fears that surrounded the choice they were asked to make.

In the words of Billy Kay the well-respected author of  Scots: The Mither Tongue

“Mary McCabe’s previous work Stirring the Dust was a linguistic tour de force which celebrated the rich diversity of the Scots language from Banffshire to the Banks of Clyde. Here with Two Closes and a Referendum, once again she demonstrates  an acute  ear for dialogue, and a lug tuned perfectly to the speech of Glasgow in the 21st century wi gleg observations on a wheen Glesga fowk.

The author has a lifetime of political activism to draw from and conveys this in a series of linked cameos and vignettes of people who embody those hopes, fears, loves and hates in a city confronting momentous change. We ken whit side the author wis on, but that disnae stop her embracing the great humanity of the multitude of kenspeckle characters inhabiting her city.”

“I enjoy Mary McCabe’s writing – so glad that the follow up to ‘Stirring the Dust’ covers such an important Scottish experience. Mary’s characters talk the way me and my friends do, invoking memories and emotions. Our independence referendum brought passion, joy and heartache: Mary McCabe tells that story.”

“Mary McCabe’s Two Closes and a Referendum summons up the magic and pace of the political contest in 2014. If you enjoyed the fight, or even if you missed it, this is the book for you.”

Mary McCabe is already the  author of two published books. Everwinding Times,  a novel about people, is still as relevant and insightful today as when it was first published. Stirring the Dust, a family biography, received much critical praise when first published in 2012, including from James Robertson, Janet Paisley and Margaret Elphinstone. It is no coincidence that both Billy Kay and Linda Fabiani (see above) both referred to their excitement that the author of Stirring  the Dust has produced another book.

Two Closes and a Referendum was published at the end of September 2017. It is now available for direct order with immediate dispatch.

Order your copy or copies of Two Closes and a Referendum now using the Paypal facility below: