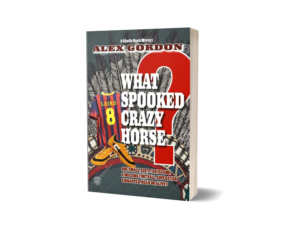 Derek ‘Crazy Horse’ Laird is hot property: one of the highest-paid footballers on the planet, with a right foot coveted by Europe’s greatest clubs and what the pundits call ‘a good head on his shoulders’. So everyone is flummoxed when Crazy Horse skips training, flees his adoptive country and heads back to his homeland, incognito.

Caught up in the tale is debonair sports-journalist turned-detective Charlie Brock (hero of Who Shot Wild Bill?). Before long, and unawares, both men are ensconced among the boozy, windswept eccentrics who inhabit the Isle of Cumbrae. It is late November, the Firth of Clyde is growing peevish and a small army of international police and ill-intentioned hacks are about to descend on the island, scenting a scandal.
The locals, however, remain oblivious. All Wee Effie, Vodka Joe and Dr Hickory Dock have on their minds is sex, booze and ferry tolls. A hilarious, affectionate and rollicking mystery about two worlds colliding. What Spooked Crazy Horse? is the sequel to Who Shot Wild Bill?.

‘Cowboys, a killing and a Country & Western Festival all add up to a rumbustious debut novel from Alex Gordon’ – Daily Record

Alex Gordon spent over 40 years at the forefront of Scottish football reporting, including as Chief Sports Sub-Editor of the Daily Record and Sports Editor of the Sunday Mail. In 2015 Ringwood published his book Jinx Dogs Burns Now Flu, ‘a rollicking, often hilarious, always entertaining’ look behind the headlines of the Scottish press. As well as Jinx, Alex has written 11 other books on Scottish football, including biographies of Denis Law, Chic Charnley and Yogi Hughes. His novel Who Shot Wild Bill? was published by Ringwood in 2016.