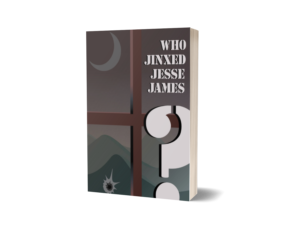 Jesse James – real name, Frank – shoots straight from the lip: the controversial gossip columnist makes a living sullying the reputations of the elite and, like his Wild West counterpart, is no stranger to infamy. But there’s something different, something sinister, about this latest series of letters in his mailbox. ‘Stay away from CC,’ the letters warn in red writing. One small snag: James has no idea who – or what – CC is. Following a suspiciously close collision with a black Ford Fiesta, he has no choice but to swallow his considerable ego and seek help.

Cue the entrance of James’ former colleague, freelance sports journalist and amateur sleuth, Charlie Brock, who soon becomes entangled in the mystery surrounding the identity of the enigmatic scribe; the individual James has taken to calling ‘The Red Phantom’…

Who Jinxed Jesse James? is the fourth entry in the thrilling Charlie Brock mystery series and is now available to order here: