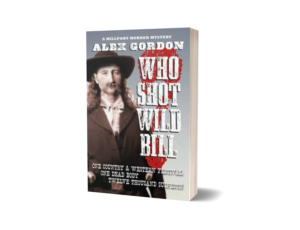 The Millport Country & Western Festival is in full swing, with 12,000 would-be Wild West heroes dressed up as cowboys and Indians, complete with toy guns, headdresses, mock bar fights and gun slinging. Millport is starting to feel more like Tombstone, Arizona. But there has never been a murder on the island. Until now.

A festival visitor, calling himself Wild Bill Hickok, has been found shot dead. Thousands of toy guns, but one of them must be real. Reporter Charlie Brock, on the island on holiday, is roped into solving this Millport murder mystery. With snappy dialogue and eccentric characters, Who Shot Wild Bill? is a quirky crime mystery and a homage to Millport.

“Cowboys, a killing and a Country & Western Festival all add up to a rumbustious debut novel from Alex Gordon.” — Daily Record

Alex Gordon is the author of Jinx Dogs Burns Now Flu and What Spooked Crazy Horse, both published by Ringwood. He is also the author of several sports books. Alex is a regular visitor to Millport on the Isle of Cumbrae, where he has a home. This is his first novel.