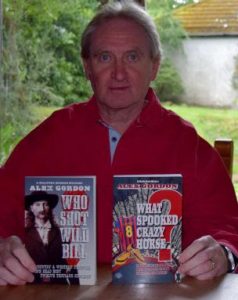 Ringwood’s author Alex Gordon, started out as a sports editor of the Scottish Sunday Mail, as well as writing twelve non-fiction football books. After an already successful writing career, he had the idea for a whodunnit novel, which sparked the main character, Charlie Brock. Despite being warned against fiction writing by some publishers, Alex was already well on his way, with his first novel, Who Shot Wild Bill, published in 2013.

This was the beginning of the Millport set, mystery series that would follow Charlie Brock — a former sports journalist, turned detective. In 2016, the second book in the series, What Spooked Crazy Horse was published.
The move from non-fiction football writing to novel writing might seem like an unlikely shift, but Alex says ‘I had been brought up on a staple diet of Agatha Christie (mixed in with a mountain of football autobiographies and biographies) and I just can’t get enough of extremely clever mystery writers.’

So where did the idea come from? Alex has spent a lot of time on Millport, an island on the west-coast of Scotland, where the novel is set. While spending some time at the Kelburne bar, sampling a small libation and chatting to his good friend and owner, Eddie Hughes and a few of the regulars, someone had mentioned there had never been a recorded murder on Millport. This set the wheels in motion for Alex, and with the annual Country and Western Festival a couple of months away — a weekend full of wannabe Buffalo Bills, Wyatt Earps and Billy The Kids, all with fake guns strapped to their hips — it would be the perfect setting for a murder mystery he thought.

Alex found no difficulty in finding a title for his novel. He says, ‘there was no big deal to it when you’ve been employed in the newspaper production for almost three decades.’ The front cover was a little more tricky he says, ‘it’s too easy to clutter up a page…I decided to go for a deck of three at the bottom…The first line read: “One Country and Western Festival”; the second: “One dead body” and the third: “Twelve thousand suspects!”

Alex talks about some of the benefits of fiction writing, over non-fiction. He speaks about the research involved and the complex details that football writing entails, not to mention relying on interviewees and their tendency to cancel last minute. Whereas with non-fiction, all your characters are ready to go. He says, ‘I didn’t have to chase them down [or] pick up an exorbitant drinks tab.’

So since Alex’s character Charlie Brock seems to share many characteristic of himself (both former sports-journalists) it stands to reason much of the protagonist is based on Alex himself? He says, ‘I had to describe Charlie Brock, the reluctant sportswriter-turned sleuth, and that was fairly easy, I just made him a better-looking version of the author!’ But Alex has talked about the enjoyment of basing his characters off of real-life people, so much so that it soon became a guessing game, trying to figure out who was who on the island.

Ringwood bought over the publishing rights to Who Shot Wild Bill, naming it as Scotland’s answer to America’s Kinky Friedman. The success of Alex’s first novel gave way to the second in the series, What Spooked Crazy Horse, which follows Charlie Brock once again solving the mysteries that behold the Island of Millport. 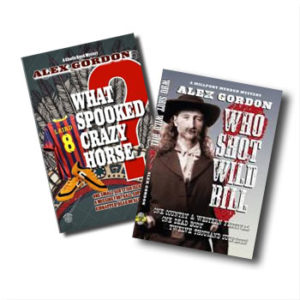 The third book in the series well is now published: Who Stole Sitting Bull. He says, ‘I just hope the readers derive as much pleasure from my novels as I have in putting them together. What’s that they say in the tabloids? Never let the facts get in the way of a good story? I’ll drink to that.’
Alex Gordon’s Charlie Brock series are available to purchase from Ringwood Publishing or from amazon.com, and make sure to keep an eye out for his next one on the way!