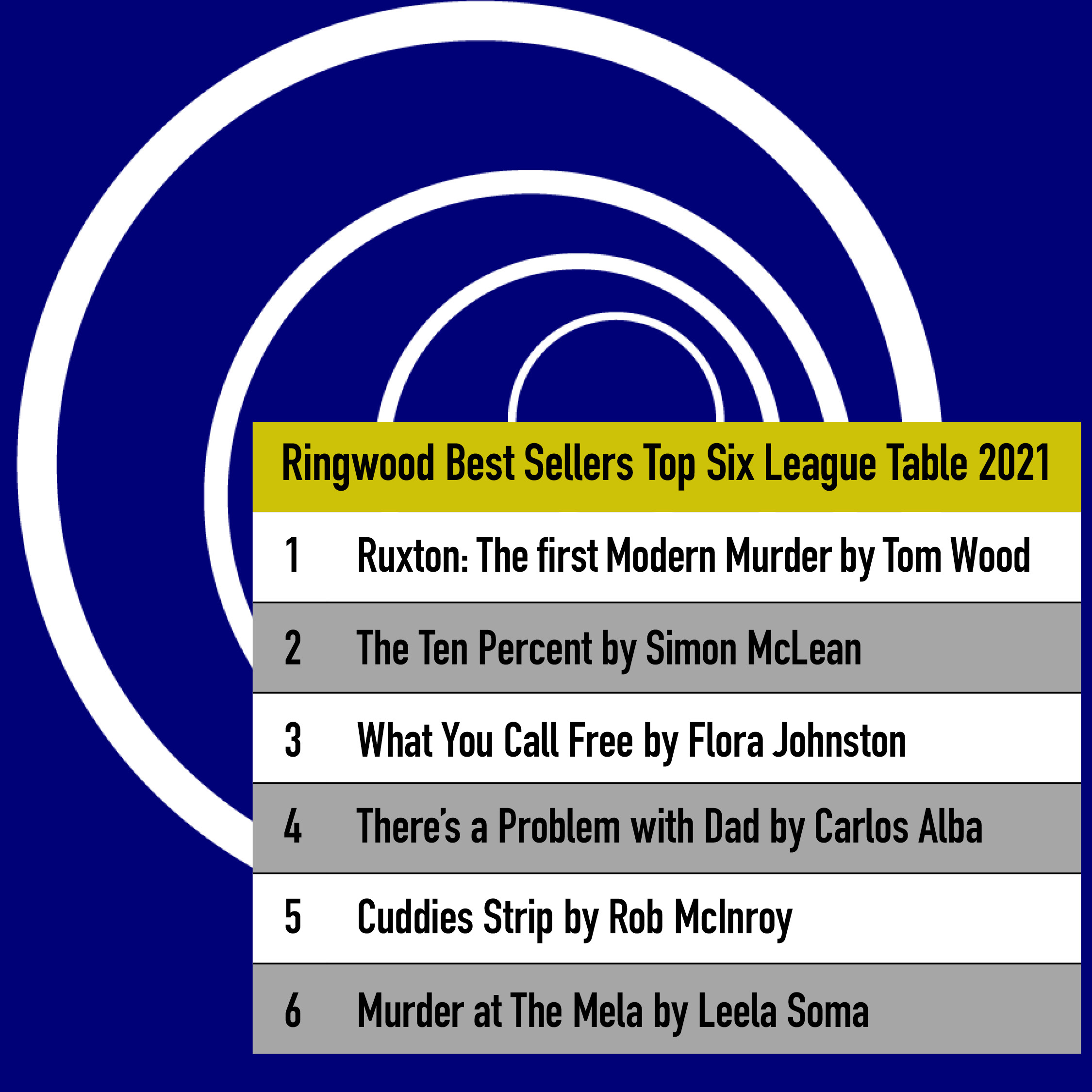 Final sales figures for all Ringwood books for 2021 are now in for all formats, paperback and ebooks, and for all areas, UK and Worldwide.

We are happy to announce that Ruxton: The First Modern Murder by Tom Wood has finished top of the final 2021 Ringwood Sales League Table. The sales for this fascinating book, first published by Ringwood in 2020, were undoubtedly helped by its short-listing for the prestigious Saltire Society Non Fiction Book of the Year Award. It came close to winning and the jury conclusion was

“Fascinating and unforgettable, this book exposes a darkly sinister tale to the light, offering novel insights into not only the criminal case but how its investigation acted as a catalyst for the transformation of modern policing and forensics. Ruxton benefits from a rigorous and resourceful research process, without ever compromising on pace or readability. A decisive moment in criminal history is examined with intelligence, clarity and originality.”

A close Second in the 2021 League Table was The Ten Percent by Simon McLean, another of the books successfully launched in 2020. The Ten Percent was by far the best selling Ringwood title in 2020 and leads combined sales over the two year period. An entertaining and thought-provoking account of a career in the police service, mostly served undercover, The Ten Percent has attracted much praise and a considerable amount of media attention.

Third and Fourth in the League Table were two works of literary fiction both published in the spring of 2021, What You Call Free by Flora Johnston and There’s a Problem with Dad by Carlos Alba. These well-written books attracted considerable critical acclaim and media attention in 2021 and are anticipated to sell even better in 2022 as word gets around about their outstanding merits.

The Top Six bestsellers list was completed by two well received and praised titles from 2020, Cuddies Strip by Rob McInroy and Murder At the Mela by Leela Soma.

Cuddies Strip, a fictionalised account of a famous Perth murder from 1935 (in a fascinating coincidence only a month apart from the Ruxton murders) was listed for the Crime Writers Dagger Award for a first crime novel and was singled out for great praise by Val McDermid at Bloody Scotland 2021.

Murder at the Mela, is a groundbreaking first crime novel featuring Scotland’s first senior Asian Police Officer, DI Alok Patel. As the Sunday Mail said, “watch out Rebus DI Patel is taking over”. Leela Soma has quickly established herself as a significant Scottish writer and poet, and has already starred at several Scottish Book Festivals with more invites on the way.

Both these books will be joined in 2022 by eagerly awaited follow-ups with Barossa Street by Rob McInroy due to be published in May and the second DI Patel book arriving before the end of the year.

Four Ringwood titles – Liberation by A M Nicol, Raise Dragon by L A Kristiansen, Saved From The Fire by Mark Gallacher and A Raccoon Stole my Thunder by Alex Gordon – were all published too late in the year to feature in this League Table, but all four are anticipated to be strong sellers in 2022. Details of these four books can be found in the bookshop section of this Ringwood website.