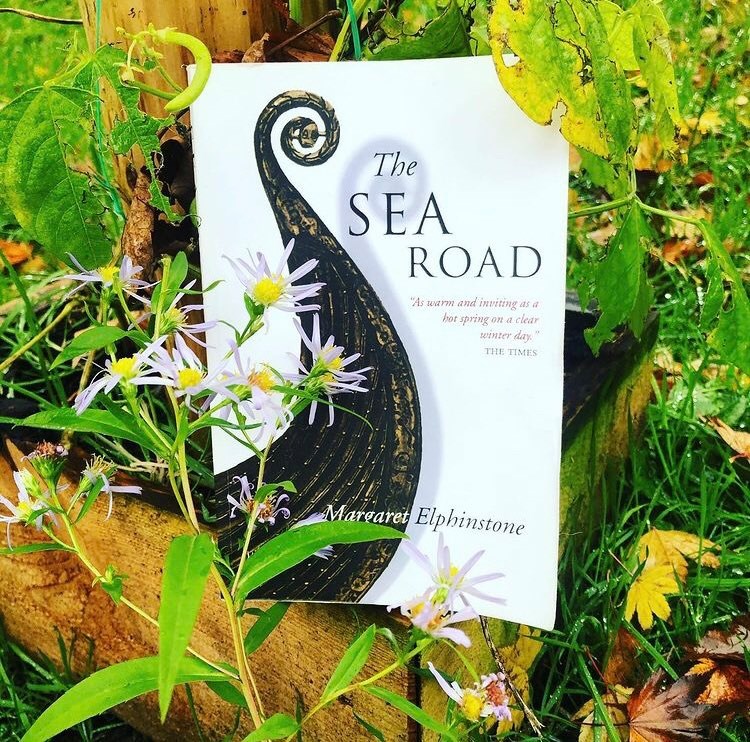 Interviewed and written by Beth Whitelaw

Last week I sat down for a chat with the wonderful Margaret Elphinstone, author of historical fiction such as The Gathering Night and The Sea Road, for a chat about life on remote islands, Viking digs, and how the pandemic has influenced her writing.

Have you been writing this past year? How has the lockdown/coronavirus manifested itself in your writing?

I’ve been doing a lot of thinking. I’ve mostly written short things, and I’ve just done a big questionnaire about my novel The Gathering Night, as someone wanted to interview me about writing about pre-history and about hunter-gatherers. It was really interesting to do something like that. One of the things he was asking me was ‘how can anyone write historical narratives? Because the past is over. We can’t go back there and instead, we’re just creating narratives about it in our own time.’

I was saying, well that’s the whole point! That we continue to revise history. We must keep revising the story and bringing it up to date. It’s always partial, we never get it right, but we must keep revising. And of course, if we’re writing about our own time, we’re talking about climate change, species extinction, terrible social injustice, that’s going to come through in what we write now about the past.

What’s been keeping you entertained this past year?

One of the most interesting books I’ve read this year is What Animals Think and Feel (Carl Safina), which is about the continuum of being sentient. What is thought? And what is the mind? As humans, we see ourselves as separate beings from everything else, and we’re in no way separate.

I’m also always re-reading books I read in my teens. I’ve been reading Mary Renault, she writes about classical Greece, and I remember I was reading this book that I last read in my early 20s going around boats in the Greek islands. When you read books you last read 40-50 years ago you realise how much they’ve shaped your thinking. You almost know them by heart, but you’ve forgotten about them for decades.

Had you had the idea for The Sea Road for a long time before you wrote it? What draws you to Norse history in particular?

I went to live in Shetland in 1972, with my six-week-old daughter. I worked in the island library part-time, and I was really interested in the history of the island itself. They had a ‘Shetland Collection’ including the Viking Sagas, and I worked my way through them.

The first thing you notice on the island is all the place names are in Norse, and the speech has a lot of Norse words. It looks so Nordic, the culture is so Nordic, it was Norse up until the 15th century and the connections have remained so strong. So, I read all the Sagas and I just got so interested. Every Summer we spent time on a small island on Papa Stour. There was a Viking dig there, and I volunteered on the dig. We were digging up a Viking royal farm. It involved bringing together archaeology, the oral tradition, and the place names, and putting them all together.

It was amazing actually. Among the various finds were the remains of a sock – woven twill – which is amazing as it was the earliest example of this kind of pre-knitting fabric in Medieval Scotland. The most exciting things I found myself were loom weights. Years later, at long Howe in Orkney, I found this little black thing as I was sorting through gravel. I immediately showed it to the Finds Director. It turned out to be a roasted hazelnut shell. When it was dated it dated the known Mesolithic history on Orkney back to c. 6000BC, which is when I’d set The Gathering Night. It felt like a good omen.

One of the reasons I love your books is because your writing is so tactile and embodied. You’re so good at allowing the reader to totally enter Gudrid’s world. Do you have any routines or things that you like to do before sitting down to write that puts you in that place?

I make a lot of notes. The National Library of Scotland has boxes of them. I did little drawings. You know when Gudrid is on the doorstep of Erik the Red’s house in Brattahlid and I describe the glaciers and icebergs in the fjord? I sat there [in Brattahlid] and made little notes of what I could see. I was sitting there when a young Greenlander came cantering past on a wee pony, and I put that in straight into the book. (Only of course it’s not a Greenlander in 1000AD; it’s one of the sons of Eirik the Red.)

You have to go to the places, and if your mind is open, everything comes to you. The travelling has been so much a part of it.

You lived on Shetland for a while. How did island life change you?

Living on Papa Stour totally shaped me. I was lucky enough to be there in the 70s. There was a way of life still there that has totally vanished. I remember I’d lived in Shetland a week, and I went across a brand new bridge to the island of Trondra. I was walking along the coast, and I came to a croft house. An old woman in a black dress and black headscarf came out, and she said, ‘Who are you?’. I said, ‘I’ve just moved to Shetland and I’m exploring.’

The idea that a stranger would pass her door and not come in was just not on her radar. And when I think about that now I think ‘wow, I’ve lived through history.’ When I worked in the Shetland Library and books were returned, they would sometimes reek of peat because people used to keep them in their baskets by the fire to keep them dry. That world has totally gone. I think the gap between the world you’ve grown up in and the world before that is probably the greatest because of communications. Never have people had so much information, but never have they had so little connection.

If you were being sent back into any time in history, where and when would you choose to live? And why?

That’s such a difficult question. If I went as me, now, I’d be dead so quickly after I got there that it wouldn’t matter. But if I was going to grow up there and be acclimatised to it, I actually would say the egalitarian world of Mesolithic hunter-gatherers. The downside – I used to think this when I was writing the book – that from our point of view their lives were like camping all the time. But of course, they didn’t see it like that! I think what I like about it, from my study of simple hunter-gatherers, it is egalitarian, there is a gender balance, you laugh at a hunter who boasts about how many animals they’ve killed or whatever.

Something I’ve been struck by on my travels is that people who have less often seem to be happier.  My granddaughter was on a plane back from Morocco and she asked, ‘why do people in Scotland not love each other?’ And I think, one of the things we’ve lost, by living close to the land, is being happy. The evidence seems to be that people seemed to be quite happy before other cultures came along and zapped them. In a Mesolithic world, I’m sure there was murder and incest and other horrible things, but I think before we had this urge to be so aggressive, to start ‘othering’ all the other creatures and all the other cultures, without the concept of ‘power over’, people were probably happier.

What changes would you like to see in Scotland in the next few years?

Margaret’s been writing about our connection with our endangered planet and the place we hold within it; past, present, and future. If you’d like to read some of her work click the links below:

If you’d like to support my own writing, you can find me @word_chutney on Instagram, or get in touch at beth.whitelaw@ringwoodpublishing.com