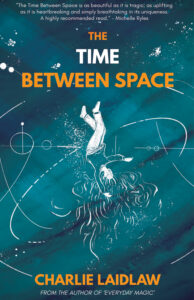 The Time Between Space features Emma Maria Rossini, a young woman who appears to have everything: the daughter of a famous film actor, she grows up in a huge mansion in one of Edinburgh’s most wealthy suburbs, surrounded by expensive sports cars, marble floors, their private tennis court, real Picasso prints framed on the walls, holiday villas in the south of France, and windows overlooking the beaches of the West Bay. Emma’s mother is beautiful and affectionate, and her father’s on-screen colleagues—most A-list celebrities of Hollywood—come and go like waves in the Rossini residence.

When a sudden tragedy strikes, Emma’s seemingly perfect life begins to fall apart. She experiences a rapid decline in her mental health and begins to see unforgiving faces in the clouds. Before she knows it, the sky itself is chasing her. Coincidentally, Emma is also the granddaughter of an eccentric and obscure Italian astrophysicist. As she begins to find solace in her grandfather’s Theorem on the universe, Emma realises that her childhood might not have been as perfect as she first remembered.

The book follows her struggles with her mental health, and her attempts to make sense of her unreliable  memories, her existence, and her place in her grandfather’s concept of the universe provide a moving account that in the words of one reviewer “The Time Between Space is as beautiful as it is tragic: as uplifting as it is heartbreaking, and simply breathtaking in its uniqueness. A highly recommended read.”

The author, Charlie Laidlaw,  a graduate of The University of Edinburgh and a teacher of creative writing, is a PR consultant currently living in East Lothian. He was previously a national newspaper journalist and defence intelligence analyst. He has lived in London and Edinburgh, and is married with two children.

Ringwood has previously published two of his novels: The Herbal Detective, due to be re-issued later in 2022, and Everyday Magic, a fascinating reworking of Charles Dickens’ A Christmas Carol, published in 2021.

For a variety of technical and logistical reasons, the Launch of The Time Between Space by Charlie Laidlaw , originally scheduled for 29th June, has had to be postponed until after the summer.
The facility to pre-order the book has been taken down but will be reintroduced onto the website as soon as a new Launch is rescheduled. Please do not attempt to purchase this title for the time being as it is unavailable and we will simply have to refund.