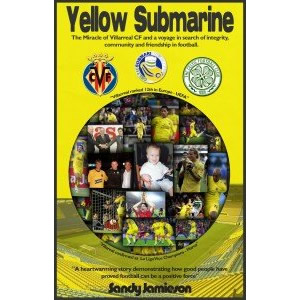 “Yellow Submarine” is essential reading for all football fans who believe that integrity, and community can and should matter even at the highest levels in modern football.

It is exceptional value, offering Two Stories for the Price of One

Book 1: The Miracle of Villarreal CF

The explanation of how a wee club from a small town of 50,000 inhabitants became a major force not just in Spain but in Europe, including becoming Semi-Finalists in the Champions League, the UEFA Cup and the Europa League, and Runners Up in La Liga. The amazing success of Villarreal offers supporters of clubs both large and small throughout Europe a model of how they too might live the dream, without having to rely on Russian or American billionaires or Arab dynasties.

It is also a story of amazing community involvement in a football club, with the number of season tickets holders representing over 40% of the population, a figure unprecedented in world football. Villarreal have by far the highest percentage of female season ticket holders, some 30%, of any major club. The Villarreal youth section has 7,000 members. In the Villarreal crowds, adult males are a minority. 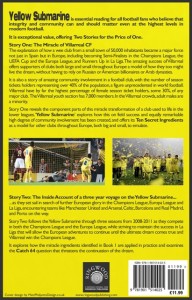 Story One reveals the component parts of this miracle transformation of a club used to life in the lower leagues. “Yellow Submarine” explores how this on field success and equally remarkable high degree of community involvement has been created, and offers its Ten Secret Ingredients as a model for other clubs throughout Europe, both big and small, to emulate.

Book 2: Inside Account of a three year voyage on the Yellow Submarine as they set sail in search of further European glory in the Champions League, Europa League and La Liga, encountering teams like Manchester United and Arsenal, Celtic, Barcelona and Real Madrid, and Porto on the way.

Story Two follows the Yellow Submarine through three seasons from 2008-2011 as they compete in both the Champions League and the Europa League, while striving to maintain the success in La Liga that will allow the European adventures to continue until the ultimate dream comes true and Villarreal win the Champions League.

It explores how the miracle ingredients identified in Book 1 are applied in practice and examines the Catch 64 question that threatens the continuation of the dream.