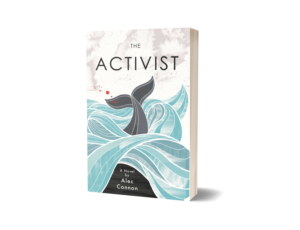 Unfulfilled by student life, Thomas Durant and two friends decide to cycle the length of Britain during their summer holidays, dressed as superheroes. The experience of their short trip is enough to whet Thomas’s appetite for further travel and set in motion his decision to drop out of uni and see the world for himself. Influenced by a burgeoning interest in marine conservation, what begins as a typical gap year develops into over decade’s worth of involvement and participation in animal rights activism. The story follows Thomas as his journey takes him around the globe, from his first tentative steps into the life of an activist in Vancouver, to his battles with the Japanese whaling fleet in the Southern Ocean.

The Activist is Scottish author Alec Connon’s debut novel. It is a novel of formation, describing not only a physical journey, but the spiritual journey of a young man in search of his calling in life. Connon’s passion for the subject is apparent throughout, yet his writing is never preachy or didactic. His story of devotion to the conservation of our oceans and marine life leaves the reader with little doubt regarding the worth of this cause.

‘Alec Connon’s extraordinary adventures into the world of the whale epitomise the vast disconnect between the human and natural world.  In this heartfelt novel, he explores the outer edges of the world which we have dominated, and the price it has had to pay for that domination.  In picaresque episodes which are by turns funny, tragic and deeply moving, Connon addresses, in a highly personal and evocative manner, the ways by which we might make amends for what we have done’.

Philip Hoare, winner of the 2009 BBC Samuel Johnson prize and author of Leviathan or, The Whale and The Sea Inside

‘The Activist is an entertaining and heartfelt antidote to sea tales penned by hunters and fishermen. In it Tom Durant joins a colourful crew of activists to turn the tables and hunt the hunters, chasing the whalers who ply their trade in defiance of an international ban. In telling Tom’s story, Connon contrasts the best and worst of people as they face off across the mountainous seas of the Southern Ocean.’

Callum Roberts, Professor of Marine Conservation at the University of York, and author of Ocean of Life and The Unnatural History of the Sea

‘The Activist is a bold and deeply affecting book – sharply atmospheric, the reader feels the ever-shifting setting with total immediacy. The enthralling tale presents the plight of the natural world – and its relationship with the human race – with an intimacy that is unlike anything I’ve ever seen in a novel. Connon has found a new and invigorating way forward for the nature writing novel.’